I was born under the bells and lived on, or not far from fire station premises from 1947 until I married in 1971.

My dad was a fireman and joined the Metropolitan Fire Brigade shortly after being discharged from the army, having served with the AIF from 1940 to 1945, which included 638 days in the Middle East during World War 2.

I was one of two children born to Portia and William (Bill) Wynd, my brother is Phil Wynd and he is two years older.

During my early years, I attended four different primary schools due to my dad being transferred several times in his job.

Fire Brigade life for me was a wonderful experience and although there were very few children around my age living on the premises at the time, I always felt like I had an extended family with the other residents and also felt safe and secure under the protective eyes of the on duty firemen.

Dad and Mum made many lifelong friends through the Brigade and Dad had plenty of golfing mates and fellow fishermen
with whom to hang out.

This is where life started for me and although we didnt actually live on the fire station premises, Mum & Dad bought their first house
just across the road, thanks to a war service loan.

Mum used to go to church every Sunday and take my 2 year old brother with her. If dad was working that day she would drop me off
at the fire station to be cared for by the firey who was on duty in the watchroom. Imagine trying that these days!

Our house was not far from Pentridge Prison and parts of it could be seen from our backyard.
One day when I was outside playing, I could hear in the distance someone yelling loudly and when I looked in that direction,
I saw a man standing on the roof of the prison. Mum came out and brought me inside and she told me some years later that he
was a prisoner who was threatening to jump.

In August 1947 Dad had a narrow escape from death while doing fire duty on board the ship Mahia which had been burnt in a
disastrous fire at Victoria Dock. He and two other firefighters were standing on the hatch pouring water into the hold.
Suddenly one of the derricks snapped and crashed to the deck just missing the three of them. Six crew members perished in that fire.

We were transferred to South Yarra when Dad was promoted to Sub-Station Officer. The fire station was located in a prime position,
not far from Chapel Street and right next door to the old AJC jam factory. We were well looked after when it came to supplies of fruit and jam.
We lived in a flat above the fire station and it was quite spacious with three bedrooms, large kitchen and separate lounge and dining rooms.
Mum and dad even had a balcony off their bedroom which overlooked Garden Street.

One night there was a fire that was so close to the fire station that the carriage couldnt be turned out.
One of the semi drivers from the AJC factory had returned to his rig to discover that his trailer was well alight.
Realising that help was close by, he drove his truck out of the factory right up to the front doors of the station.
The doors suffered a severe scorching before the blaze was brought under control.
Mum, my brother and I were watching from the balcony for a short time, until it became too dangerous.

It was from South Yarra that I started school at St. Josephs Primary, which was to be the first of four primary schools that I would attend.

When we moved to Windsor Mum couldnt believe how modern and spacious our premises were.
I think it was a reasonably new fire station so everything was very up to date.
It was more like a normal house rather than a flat and it was a standalone on ground level.

There was a picture theatre across the road which we used to attend once a week. We would just walk across the road to the theatre and at interval we would walk back to the flat so Mum could have a cup of tea and then we would return for the second half after interval.

I started school at St. Marys East St. Kilda at around midyear and was 10 years old at the time. I must say I didnt fit in very well at this school as the other students seemed to be more advanced and I didnt enjoy it one bit. It was intended that I would enrol at Presentation Convent in Chapel Street when the time came, however we werent there long enough for this to eventuate.


This was the largest fire station we had lived in and we were allocated to the top floor. This was also a very spacious flat and had a balcony off the living room which overlooked Swanston Street. The laundry and clothes lines were on the flat roof of the building and this is also where cracker night took place for our family.

It was at this station that I had my first experience with fire poles and my claim to fame is that I was courageous enough to try them out before my brother. Its a long way to the bottom of those pole wells when youre only 10 years old. Dad gave me instructions first, telling me never to go down with bare arms or legs (what good advice). Whilst we lived at Carlton I think I used the poles more than I used the stairs.

I used to think it was great when Dad would say he needed practice performing his firemans lift and he would proceed to lift me up, place me across his shoulders and carry me around the room.

I started school at St. Georges Primary and was really happy there. It was here that I met my lifelong friend Ellen Doyle, who lived not far from the fire station. Carlton was a great place to live with all the shops in Lygon Street and just a tram ride away from the city with the tram running right in front of our building in Swanston Street.

In 1961, my Dad was promoted to Station Officer and we were transferred to Camberwell..


Camberwell Fire Station was also in a great location. There were two flats next to the fire station separated by a lawn and I think there was only one above the fire station itself. Ours was on two floors with 3 bedrooms and bathroom upstairs and a lounge, kitchen and dining area downstairs. We also had lights and bells that would be automatically activated in our flat whenever there was a fire call, I got so used to it that I was very rarely disturbed.

Once again, we had a tram running right along Camberwell Road outside our door and with the Camberwell Junction shops just a few tram stops away, Mum thought it was wonderful.

In 1964 Dad and his crew were sent on for further assistance at the disastrous bushfires which were threatening Melbournes outer suburbs. They left at 10.00 a.m. and arrived home exhausted at 1.00 a.m. the next morning.

A month later on February 3rd, he attended his most horrific fire which claimed the lives of a number of small children, when a childcare centre caught fire in Templestowe. This fire had a devastating effect on Dad to the point where he couldnt eat or sleep and was reluctant to talk. I knew something was wrong but didnt know what it was, except that it also had a profound effect on Mum.

During our time at Camberwell, Dad had another lucky escape when at 2.00 a.m., one morning, the fire carriage turned out to a call. At the corner of Whitehorse and Balwyn Roads, it was involved in a violent collision with a fruit truck. Fortunately none of the firefighters were hurt but Dad was trapped under the carriage and saturated in petrol. Luckily no stray sparks came in contact with him before fellow firefighters hosed him down.

An annual event at Camberwell was a Christmas party inside the fire station. The appliances were moved out and trestle tables set up with food and drink and Christmas gifts were distributed. If there was a fire call, it would be a mad scramble for the men to gather their gear and take off, however the families would all stay put and continue with the party.

Around 1968, I borrowed Dads car and went to a dance in the city with a girlfriend. I always had instructions to be home by a certain time and usually complied, however, on this particular night I met a guy (who would later become my husband), who took my girlfriend and I for coffee. It was one of the foggiest nights I have ever experienced and on my way home (around midnight) the only way I could see where I was going was to follow the trams tracks. AS I approached the fire station I saw three people standing in front of the doors to the station and as I got closer, I realised it was my Mum, with a fireman either side of her, all waiting for me to get home. This was the way of the Fire Brigade back then and it wasnt until later in life I realised how protected I felt and how much they respected Mum.

In 1971 Dad was transferred to Richmond fire station for 3 years but still resided at Camberwell. From there he worked at Batman Street, Windsor and Footscray stations, spending a short time at each. His final transfer came in February 1976 after he was promoted to District Officer and worked at Brunswick fire station.

When I married in 1971 some of my wedding photos were taken with myself and two matrons of honour in a fire carriage outside Camberwell fire station.

I feel privileged and proud to have grown up as a Fireys daughter and to have been born under the bells.


Trish wrote this as an ISO project during the Melbuorne COVID lockdowns.
The FSMV is very thankful to Trish for sharing this with us and llowing us to publish it.

We would encourage anyone and everyone to try something like this as everyone's memories contribute
to our collective history. So why not write up a few stories or memories and send them in to the museum
and we can publish them on your behalf ! 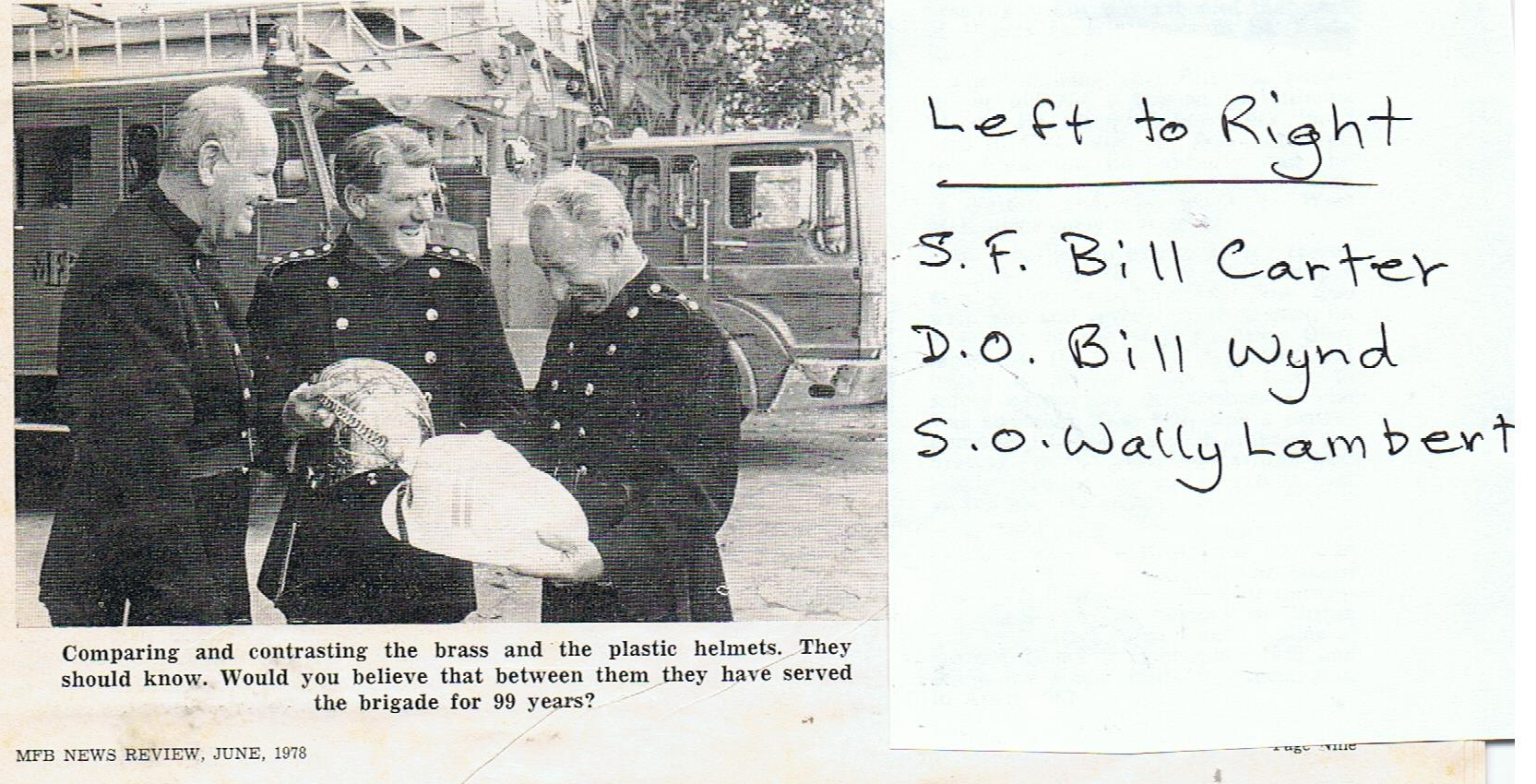